When it's silent inside, it feels right.

If I were to think of all the vocabulary that I have learn in my 18 years on this planet and if I were to pick the most human of all of those words, I think that I would pick the word Catharsis. Merriam-Webster defines it as follows:

Looking at any emotion that a human can experience, I've realized that when simplified most are not mutually exclusive to humans. I've witnessed my pets feel sadness, loneliness, joy and satisfaction. Comfort, serenity, peace and torment. Even if they couldn't have felt them in the full beauty that humans could feel them, they are very natural and earthly emotions.

But the one feeling that I believe is truly exclusive to humans is in fact catharsis. This blog has been, for almost 4 years now, cathartic for me. I have found myself able to layout my problems, ideas and observations and make some sense of them. My piano is especially cathartic to me; I've spent so many hours making chord progressions that described my feelings better than any set of words could have. Through college acceptance, rejection, through boys and relationship confusion, through family and friend trials catharsis has always been my means to self acceptance.

I actually just wrote a graduation speech for my English class all about self acceptance. I might get around to posting it on this blog if it strikes my fancy. Life goes on, and that's okay. Anyway, tonight I experienced one of my favorite forms of catharsis when the choirs of Viewmont High School sang at their final concert of the year. Catharsis almost by definition is self driven, and when music is most cathartic, it is being created by the one whose emotions are being purified. Tonight I sat in my seat helpless to the torrential flood of emotions that were enveloping me.

But that's all part of life, isn't it? That's why they say live every moment to the fullest or whatever. Meet people that you won't have the chance to meet again, live in cities that you won't get to live in later in life and do things while you are young so that you don't miss a once in a life time opportunity. I think someone once called that Carpe Diem.

I think that half of me right now is so caught up in high school with the desire to make all I can of every moment. The other part of me is ready for new adventure and more mature social spheres. But none of me wants to stay where I am. Is that unusual? It's not that I don't like my current situation in life. I am really happy where I am and what I'm doing and who I'm doing it with.

Sitting here in my bed wrapped up in blankets, It occurred to me that the reason I don't want to stay where I am is not that I don't like where I am, rather it is that I am so incredibly happy where I am going. And I don't mean college, or a new job or any of that. I mean that I just find so much pleasure in the journey. It is so satisfying knowing that I am moving forward and that I am becoming a better version of myself.

After all is said and done, only we know what versions of ourselves we will become. 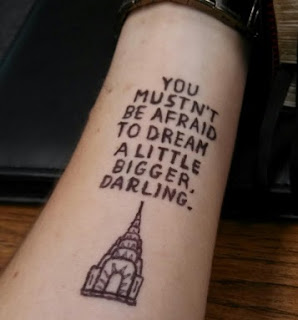 I would never get a tattoo, but I love writing on my arm for a few days at a time a quote that strikes my fancy. This week it's been this quote, from Inception of all places.

I never know the state that you're in


It's obvious to climb in your skin
But I know how to walk across
When it's silent inside, it feels right


Inside you're so warm
Your eyes open up
To the sunrise


I love you guys.