You could ask my best friend Aerielle what my favorite activity is and she would pull a quote from our inside joke list, "You like going up to high places and looking at things, so we may as well."

Realizing that I haven't blogged in about two weeks, there have been a lot of things happening in my life that are noteworthy. Since last writing I have graduated LDS Seminary, graduated from Viewmont High School, I have attended freshman orientation at the University of Utah, signed up for classes, gone on several small adventures and have watched an unfortunately large amount of conspiracy theory documentaries.

I wish I was more excited to write about graduation and the end of high school and what not, but frankly I think that it's been pretty obvious that my senior year has been relatively anticlimactic for me. My graduation ceremony was very nice, and the after graduation all-night-party was also very fun.

Getting back to the fact that I like to go to high places and look at things, last week after coming back from Utah's Hogle Zoo, Aerielle and I went up to the observation deck of The Church Office Building in downtown SLC. The church office building is actually the second tallest building in Utah, but the tallest, the Wells Fargo Center down the street, actually sits on lower ground making this the tallest vantage point in downtown. Having figured out my phone's panorama feature, I took lots of photos.

After this lovely adventure, I got to go to a two day, overnight orientation at the University of Utah. Not gonna lie, before hand I was a little bit less than enthusiastic, but I can assure you I am very much excited to go there this fall. The cool thing about going to such a large university is that I'll get to take a larger variety of classes including Japanese. And I'll have the chance to double major if I want, (And right now, a double major in Architecture and Urban Planning sounds really appealing,) and I get to stay in a city that has really grown on me.

I know I originally said that I really wanted to get out of Utah, and for a lot of my friends who were born in raised here, going to the U of U as a second or third choice means that they won't get to leave for a few more years. I really though that was my destination too. I think now my perspective is that in all reality, I had a good 16 years on the east coast, and now I'll get at least a full 6 in the mountain west. It's no New York or Virginia, but I'm really happy that I get this experience while I'm young.

When it comes to other fantastic recent events, I have to mention this one. Last Saturday I had a really fantastic date with a boy named Mark. We had dinner at The Garden on top the Joseph Smith Memorial building in downtown and afterwards we hiked Ensign Peak overlooking the whole Salt Lake valley at sunset, where I took the photo above. Like..... it was a really good date. Probably one of the best I've had in the longest time. 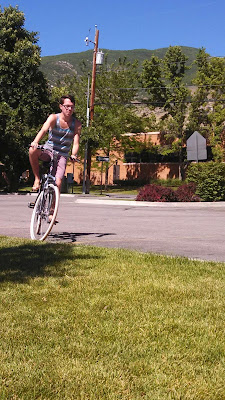 And I also got a bike! After having to give away my bike when we moved from North Carolina to Utah, this was the first time I had ridden one in almost two years. I'm kinda ridiculously excited about this new addition. Kudos to my parents for this graduation gift. 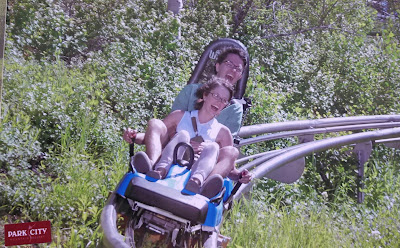 For the final event of this blog post, this fine afternoon my family, Aerielle and I all went up to Park City to have some summer fun at a ski resort. Which is pretty much a huge irony, but we'll get past that. They had this awesome alpine coaster you get to ride, and Aerielle and I had a blast on it. Hopefully this very expensive $15 courtesy photo depicts our exuberant expressions.

If you follow any social media, you may have noticed a change with my name recently. You see, it's always been on my bucket list to go by a different name for a year. I think it was in 7th grade when I first had the idea to go by my middle name, Browne (With the "o" pronounced as in "Rome" or "cone" or "trombone"). As much as a looooove my first name, Aaron, it really has very little personal meaning. I mean, my parents picked it out primarily because it sounded good with my middle and last name. My middle name, Browne, is actually a family name, being the middle name of my grandfather on my dad's side, Edwin Browne Sebright. I came really close on three different occasions to go by this name, first at the beginning of 8th grade when a few other kids in our grade decided to go by different names. Not having done that, I almost did it my freshman year, although knowing so few people and trying to make the adjustment into high school I totally gave up that idea. Then I almost did it again beginning in my Junior year when I moved to Utah, although as motivated as I was this time, I ended up not doing it primarily because I forgot about it.

But with the start of college, I realized that this will be one of the last times that I'll have a chance to do something like this in my youth. So I thought to myself, "What the heck", and I've decided to start the transition this summer for the start of school in the fall. If you've called me Aaron for the past 18 years, by all means, please keep calling me that. But for future reference, I'll probably be introducing myself as Browne to new folks I meet.

I think this blog post has ran long enough.

I love each and every one of you,