An Alberta Road Trip in Selfies (And A Few Other Photos)

The selfies are in chronological order. Everything else is not.

I never really told you guys about going to Alberta! I'm getting into this bad habit where I go on these road trips and tell very few people, and then start posting photos from there. I know I never got around to posting about my Vancouver trip, and good golly, I'm not sure I'll get around to posting about the Navajo Nation, but at least I'll have Alberta down. 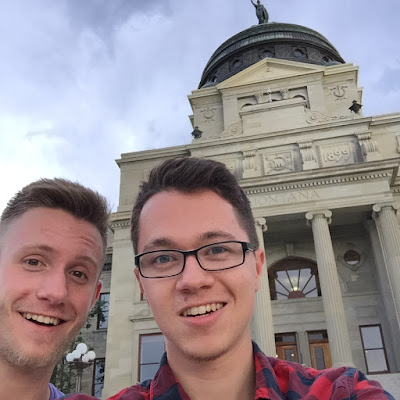 So go back a month, and you'll see that Jake and I began our road trip with a 7 hour gallivant from Salt Lake City, UT to Helena, MT.  It was a good halfway point between home and our destination, and a city neither of us had been to before. It was probably one of the best stops we could have made. The town has such a cool character to it, such good Romanesque architecture and just a really cool vibe in general. It also happens to be the capitol of Montana, and our Airbnb was a quick 5 minute walk from it. Unfortunately the building was closed, but we managed to snap this photo before heading out. 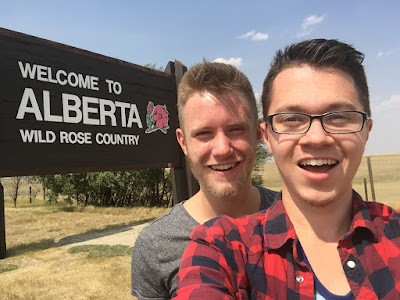 Our next stop was the border! I've crossed into Canada three other times, all by land. This was probably the least dramatic of those crossings. It is lots of farm and prairie land that goes into more Canadian farm and prairie land. The point is, this particular crossing is essentially in the middle of nowhere. It happens to be at the northern terminus of I-15, and the closest border crossing to Calgary, which is the only reason it exists. 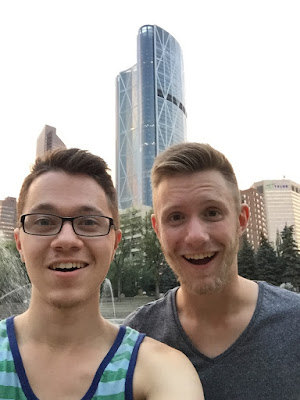 This is the Bow! Which is the tower directly behind us. This was our first night in the city after checking into our Airbnb. We just wanted to explore a little bit, and this was taken at the Olympic Park in downtown Calgary. We spent most of our time in the city doing everything from Shakespeare in the park, to Taste of Calgary (a kind of buffet of all city restaurants), visiting shopping malls, using the 15+ network of skybridges to get around the city and eventually visiting the University of Calgary. 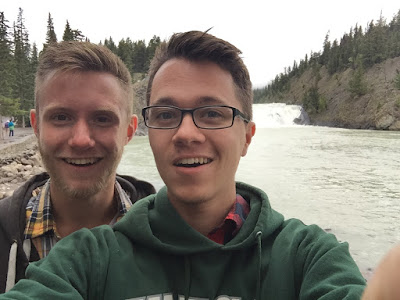 We did spend an entire day in Banff National Park. It is sort of regarded as the Yellowstone of Canada, and it was the country's first and most famous national park. And my god, it was beautiful. Behind us are the Bow Falls. They are more of a set of large cascades along the river. We followed this river all the way from downtown Calgary to its glacial headwaters. 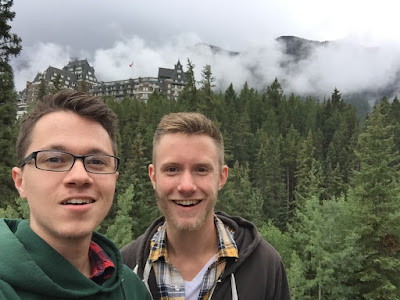 This is the Banff Springs Hotel. It was one of the old historic hotels built along the Canadian National Railroad to bring tourists and passengers from as far away as Toronto and Montréal. It is located directly above the waterfalls we took a picture in from of. 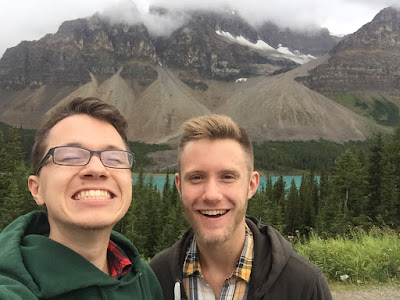 This is a lake. I can't quite remember which one. It was blue and beautiful. This one just took our breath away and I insisted it was selfie worthy. All of the water in the park was a glacier, like, yesterday. You can actually see a bit of a glacier in this photo, hanging high above the lake. We did a long, roughly 4 hour round trip scenic drive through Banff National Park to Jasper National Park and we probably saw at least two dozen glaciers. 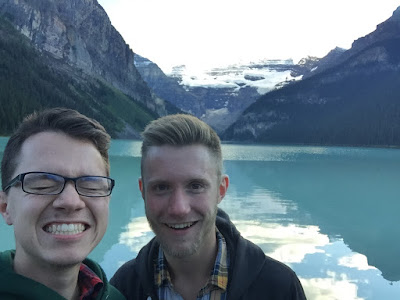 This is one of the most photographed lakes in the world. It is called Lake Louise, and you should google it right this second. We were there later in the evening to beat the crowds but consequently we got the poor end of the lighting. The lake is as beautiful in person as it is in the photos. Although honestly after spending an entire day looking at one impossibly beautiful thing after another, some of the initial amazement may have worn off. 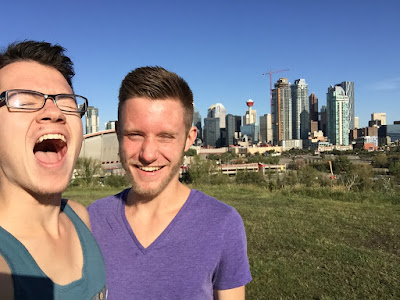 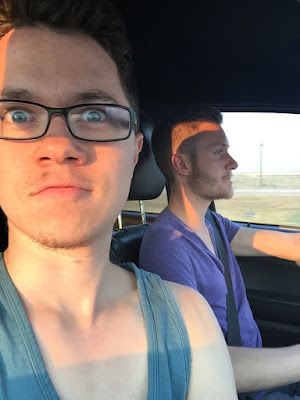 This is us somewhere in Idaho. We decided to do the 13 hour journey home in one giant hurrah, and it was hard not to get a little bored once and a while. Jake is a really handsome fellow.

Below are a selection of photos in no particular order that I took on the trip. I'll include captions for some of them, but mostly they are just really great things to look at. 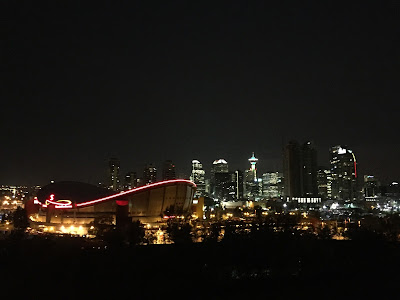 Above is the city of Calgary at night with the Saddle Dome in front. The Saddle Dome is the centre piece of a large complex known as the Calgary Stampede, one of the largest of its kind in the world. Our train station was on the other side of that building, so we ended up walking around it probably a dozen times in our short time there. 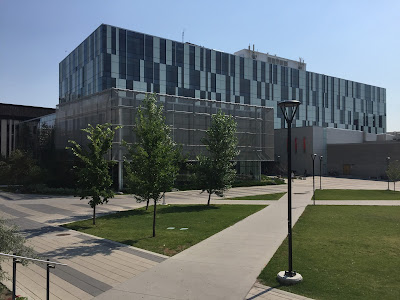 This is the library at the University of Calgary. I had two different meetings with advisers in their planning school, and we had a self guided tour of the campus while were were there.

This one is great. This is taken from a park above Helena, MT. I would call it the Ensign Peak of Helena. You should zoon in on this one, because it was just beautiful. 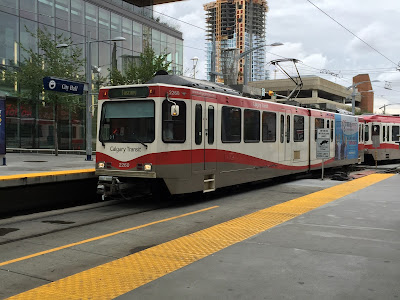 The Calgary C-Train. It is the oldest light rail system in North America, and it was a super convenient way to get around the city.

Everything below this is from either Banff or Jasper National Park. The second to last photo is the Athabasca Glacier, which was so rad you should definitely google it. 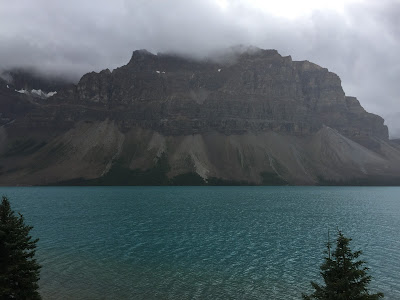 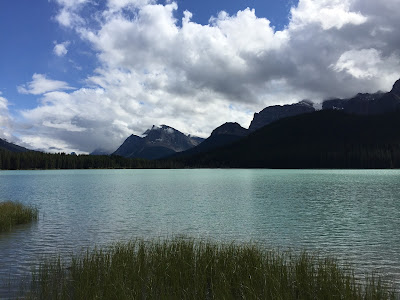 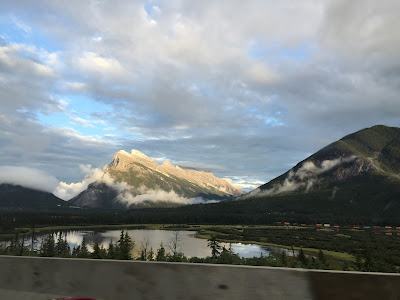 That was our trip in selfies! (And some other photos). It was totally an awesome experience, and it has definitely given me a lot to thing about when it comes to deciding where to apply to grad school. I'll try my best to get my next road trip up on here from the Navajo Nation, but until then, you can always read and then re-read this post!