Getting Sidetracked in Colorado

As spring break rolled forward, Jake and I knew we needed to let off steam from all the stress of the semester. Honestly, I was getting a bit of tunnel vision with all the projects and midterms that were ahead of me, so we made plans early on that we knew would be just the ticket for a relaxing and refreshing spring break. After chugging along through mid terms, the light at the end of the tunnel was finally visible.

And what was just the ticket? An actual train ticket. On Amtrak. 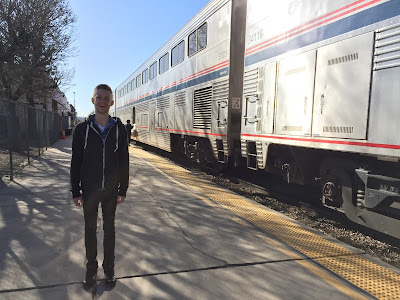 So halfway through spring break, we boarded the California Zephyr in Salt Lake City on our way to Glenwood Springs, Colorado. This is a photo I took of Jake when our train was at a stopped in Grand Junction, CO. The reason I didn't take any photos when we were boarding is because our train departed Salt Lake City at 3:30 am. AM. Part of the reality of cross country train travel is that not all stops are going to be at convenient hours. And just our luck, a San Francisco departure at 9:00 am means a middle of the night stop for us Utahns. 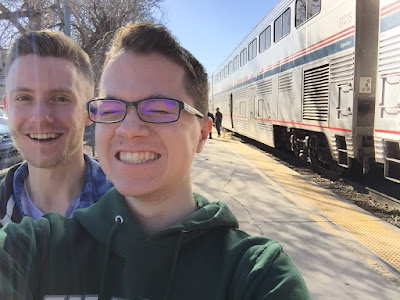 And let me tell you, there is no good way to wake up for a 3:30 am departure. We had to be at the station half an hour early, and since the station was on the other side of downtown we had to get up a little earlier to make sure we could get an Uber there. I ended up sleeping for about two hours before we left, and then maybe another two hours on the train.

Anyone who knew me at any time during my childhood knows my adoration of locomotion, and so understandably it was hard for me to fall asleep just from the excitement alone. 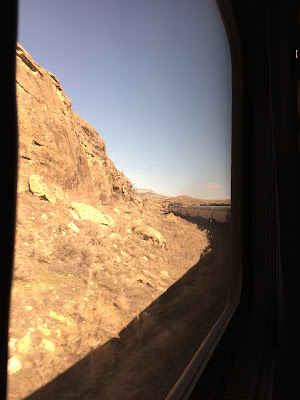 Traveling by train was absolutely fantastic. I've taken Amtrak a few times before while I lived in North Carolina with my dad. Once to Raleigh and once to Charlotte-- both of which were fairly short intercity trains. In contrast, the California Zephyr is a city on wheels. A typical consist has two locomotives, a baggage car, a crew car, three sleeper cars, a dinning car, a lounge/cafe car, and three coach cars. Additionally, our eastbound train had three private coaches on the end of the train. I actually looked up how much it would cost to transport three private coaches from San Francisco to Chicago on the Zephyr and it was something like $11,000.

That being said, the train was very long-- nearly a quarter of a mile. Our coach was towards the back of the train, so it made for great views of  the front of the train as we went around bends. And the views were STUNNING. 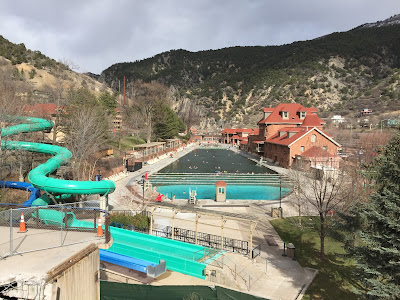 When we finally got to Glenwood Springs, it was just after 12:00 pm. We had breakfast in the dinning car of the train where met two young guys-- one from Boston and the other from San Jose (is that right Jake? Or was it somewhere else in the Bay Area?) The weather was fairly nice when we arrived. Glenwood Springs is such a compact little city and it was perfectly walkable. Our AirBNB was just a few minutes walk from the station, and so were the city's name sake, the Hot Springs. The town happens to be home to the largest hot spring pool in the world, almost the size of a football field.

The hot springs were founded in 1888, and the surrounding town has pretty much always been a tourist city. In fact, Teddy Roosevelt once spent an entire summer in the Hotel Colorado, seen above. The idea that the town has only ever been a tourist town was actually pretty apparent. The locals we met there were extremely nice. They use the hot springs just like everyone else and seemed genuinely interested in where we were from and what brought us here. People also seemed tickled that we took the train in from Salt Lake City. Along with the hot springs, the town has also expanded to include a few other touristy amenities. The nearby city of Aspen has all the skiing, so Glenwood Springs used the top of one of their mountains for an amusement park. Unfortunately for us, the park was running limited operations until the next week when Colorado's spring break started. We ended up taking the tram to the park, walked around a bit, and then took down the tram just a few minutes later. The views of the city were pretty magnificent though! 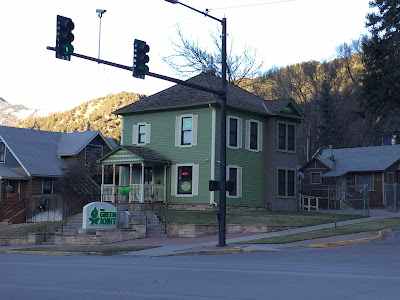 Would it really be a trip to Colorado if our AirBNB wasn't a block and a half from a dispensary? Don't worry mom and dad, we made sure to keep our distance while in town. ;) 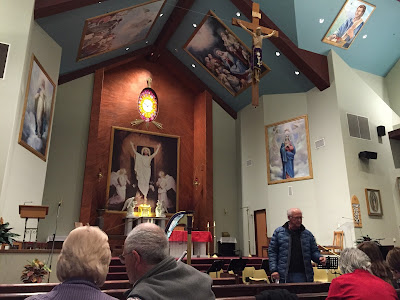 We had a pretty laid back trip. We hung out at our AirBNB for a while and tried to not over burden our schedule with activities. I picked up a copy of the local newspaper while in town and saw that a Aspen choir was having a concert that evening. They had an organ performance, and the choir sang with a chamber orchestra. It was really magnificent, although the architecture of the Catholic church was a liiiiitle gaudy. 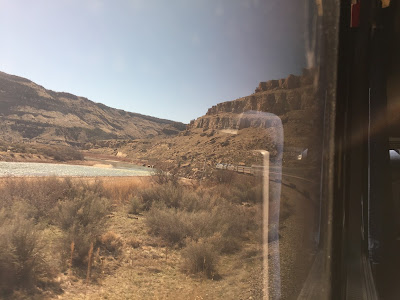 We headed out the next morning. The train ride home was just lovely. We spend most of our time looking out the windows at the gorgeous scenery in the lounge car. The California Zephyr travels through a canyon on the Colorado/Utah border that can only be seen by train or by rafting the Colorado river. We got dinner that evening in the dinning car. We shared our booth with an older couple from Virginia. They live about four hours from where I grew up and their accents made me extremely nostalgic for the south. They were on a trip from their home in Virginia to Los Angeles, via Chicago. 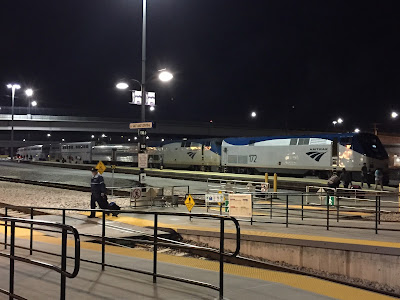 We arrived in Salt Lake City almost an hour earlier than our scheduled time, around 10:15 pm. It was early enough that all the local trains in the city were still running, so instead of taking an Uber home, we caught a blue line train to downtown and walked the last few blocks to our apartment. It was very satisfying being able another train home. It really brought our my inner ferroequinologist.

Lastly, here is a gif I made of our west bound train pulling into Glenwood Springs. I take way too many photos on Jake's phone trying to capture the perfect Instagram-able photo which results in a long set of photos that happen to translate into a halfway decent animated gif.

Thanks for reading! Hopefully you all decide that train is your preferred form of transport, or at least it might inspire you to take a trip in a way you haven't done before.

Best wishes, and I'll get back to y'all later!