In which I don't post for a year, and I pretend like it isn't a big deal 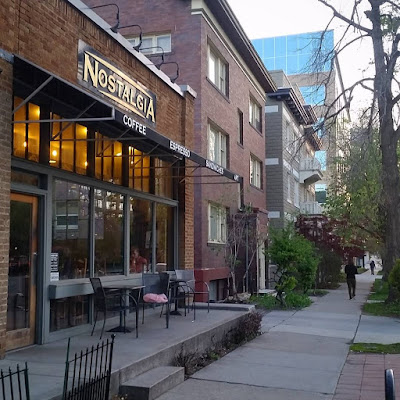 It's been almost a whole year. Well, ten months and some change. Either way, it was a much longer break than I anticipated and a lot longer than I would have preferred.

I'm currently in the coffee shop you see above. I took that photo a few ours ago on my way in because I thought the lighting was nice. I wanted to give you guys a sense of what I've been doing for the past year, and this sums it up well. The amount of time spent in Nostalgia rivals the time I've spent home senior year and despite its uncomfortable chairs and interesting music selections it has been a great place for me. Jake is here more often than me it seems-- he has been pushing hard the past two semesters as he finishes his degree in Computer Science.

I, on the other hand, am already done with my major! I finished my Urban Ecology capstone studio last semester, and we just gave our final presentation to the community a few weeks ago. For my final semester, I'm taking two sociology courses to round out my second minor. The decision to leave two non-major classes to my last semester has been a terrible decisions, as it turns out. It's not that these course are particularly difficult, but I've certainly had a bad case of seniority this semester.

(Side note: every time I try to explain my senioritis to friends or family, I always come back to the 2004 classic, "A Cinderella Story" staring Hilary Duff. There is a scene where her evil step mother played by Jennifer Coolidge protests Samantha taking off work to study for school. Coming out of the tanning booth, she says "People go to school to get smarter, so they can get a job. You already have a job. So it's like skipping a step!").

I swear I've been doing things worth writing about in the last ten months. After the wedding, Jake and I took our honeymoon in Boston, Portland, Provincetown and Cambridge. We took plane, train, bus, subway, ferry, taxi and even a friend's car to get from adventure to adventure. I started a part-time job last fall with Bountiful City as an assistant planner.

We went to Denver. Twice, actually. (Edit: we actually went three times! We had a very brief 4 hour layover in Denver on our way out to Atlanta). Then, in January I finally got the chance to take Jake to North Carolina so he could see my home town of Clemmons. Then there was a quick trip down to Los Angeles for a little weekend getaway. We currently have a weekend trip to Seattle in the works, so stay tuned for that.

It feels like every moment in between has been filled with homework. I know that isn't true, but it sure feels like I've had a lot on my plate this past year. Between internships, new jobs, school and life-- I often feel like I'm running on autopilot. I have to remind myself pretty regularly that life after college will be here sooner or later. I hope that I can make the best of the last two weeks I have before graduation. Even graduation feels like a distant dream, though.

Jake will be going full time at his company in a few weeks here, and my job is expected to go full time sometime in July. Unfortunately, I will have to apply for the full time position as this is government. I'm not sure how I feel about that yet-- on one hand it seems like a great opportunity and a step forward for my career. On the other hand, the position is designed to be long term, and I'm going to be leaving Salt Lake in the next year or so for graduate school.

I'm starting to feel this itch to make plans for my next adventure in life. I have a feeling I might want to pivot slightly in my career path, maybe to something in the private sector. Urban Planning graduate programs are largely designed to encourage focus and I feel like that will be good for me after such a broad undergraduate degree. I just need to keep reminding myself that I'm STILL 21 YEARS OLD and that I have a lot of time ahead of me to make decisions. Patience has never been one of my strong skills, and I certainly wouldn't mind getting ahead sooner rather than later.

I'll leave with one final bit:

Jake and I have made a tradition of going to Catholic mass every Christmas and Easter. In part it is a way to celebrate our Christian upbringings, but I'd wager that it is mostly to hear the 79 rank organ and trumpets belt out incredible hymns. I snuck a quick video of the opening hymn to give you an idea.

Thanks for sticking around with me! I'll catch you next time.