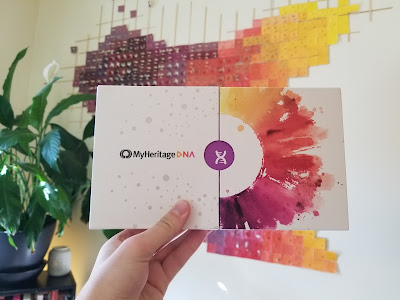 Unrelated to the title of this post, I took a DNA test today! Jake's company, MyHeritage, produces these DNA tests that can tell you more about where your ancestors came from and potentially who your living relatives are. I just mailed my test off today so should get my results in a few weeks. The kit also perfectly matched my wall art.

More importantly, I have left my position as a planner at Bountiful! I had always expected to leave this job some time before grad school, but a few events coincided that made October the perfect time to head out. My part time position was being replaced by an equivalent full time position. I had anticipated this being back in June or July, but because of regular government delays it didn't end up happening until September.

I had initially applied for the position, but I ended up withdrawing my application a few days before the interview. I've had a lot of mentors, professional and academic, who have encouraged me to go to grad school as soon as quickly as I can. I am currently on my gap year between my undergraduate degree and grad school and at first I thought I would be working the whole time. But a few things have changed since then.

There is a really good chance that I will be going to grad school somewhere other than Salt Lake City. Jake and I are currently planning on moving to that new city pretty soon after I get an acceptance letter. That times well with the end of our lease, and it gives us the chance to settle into a new city over the summer. If I had gotten the full time position last month, that would only give me about six months before I would be leave it.

Also, I just paid off my student loans! I've been in a really fortunate position where I've been able to put almost my entire paycheck towards my loans and have been been making pretty aggressive payments this last year. That has been a really great feeling, and it gives me more flexibility to decide what I want to do next.

Finally, grad school is coming and I need to get ready. That means taking the GRE (which I did for the first time last week!), putting together applications, getting letters of recommendations and putting together a small portfolio. In addition to all of that, I need to decide what schools I want to apply for. I already have a running list of schools I'm interested in, but depending on my GRE scores that list may be changing. Stay tuned to find out where the heck I will be moving to in a few months. 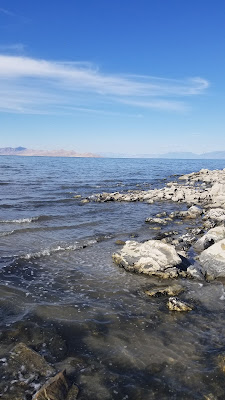 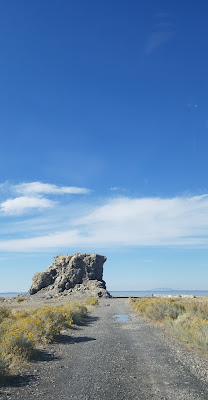 So that brings me to today! Above is the southern shore of Great Salt Lake, near Black Rock/GSL Marina. Jake and I actually took our engagement photos at this exact spot. I was there a few weeks ago to collect materials for an aquarium I wanted to put together.

I've been reading online about how people can create self sustaining aquariums with algae and brine shrimp. They are usually fairly small, but because they contain a complete ecosystem are hypothetically self sustaining as long as they get sunlight. Because Great Salt Lake is endorheic or terminal by nature, it is essentially the same thing on a much more massive scale. Even better, because the largest species living in the lake are brine shrimp, it makes it easy to scale down for a self contained ecosystem in a box.

See Artemia franciscana? That's my good friend the brine shrimp (aka "sea monkeys"). Although brine shrimp are found all over the world, the species in Utah is most similar to those in San Francisco bay. However, the shrimp in GSL tend to be (slightly) larger which makes them especially valuable in the fish food industry.

For my aquarium, I collected the brine shrimp eggs over the summer on the shore line of GSL. The brine shrimp eggs (technically: cysts) are ridiculously small. About 50 could fit on the head of a pin. They are this bronze-y/redish color and the are everywhere. I went out to the lake and grabbed a handful. Then I took them home and put them in a jar until I had the whole tank ready to go.

Then about two weeks ago I went out to the lake to get a few gallons of authentic salty lake water, along with some sand, rocks and a few sage brush branches. I caught exactly one wild shrimp and I named her Corrine. She has continued to live what I can only assume is a happy life in this new tank. The cool thing about collecting my materials from the wild is that they contain all the native phytoplankton, cyanobacteria and bacteria that my brine shrimp need to thrive.

The shrimp are pretty small. About half a dozen could fit on a the head of a dime. Aside from shrimp, I'm also raising a dozen or so brine fly larvae. They are the little worm-like animals that grow up to be the shore flies that we know and love/loathe. The spend the majority of their life swimming underwater and only live for a day or two on the surface as a fly. I didn't actually intend on raising brine flies, but their eggs must have been attached to the rocks I had collected.


It was pretty difficult to get a video of them. You can make out half a dozen of them in the video above, although they aren't always in focus.

The internet says it takes about three weeks for them to reach adulthood. Mine hatched almost exactly two weeks ago, and I'm guessing they have already reach adulthood based on their libido. They are already reproducing like crazy, which makes me think this self sustaining ecosystem thing might just work. I'm excited to see what their full life cycle is like. I've gained a lot of appreciation for the little guys already.

Hopefully I'll have an update on the aquarium in a few weeks. Until then, I'm going to be cracking open some grad school applications and playing with my cat. Thanks for reading all about my shrimp babies and check out the video below to get a better sense of what they look like up close and personal.